Design for Manufacturability and Assembly (DfMA)

Design for Assembly (DfA) and Design for Manufacturability (DfM)

Design for Assembly (DfA) and Design for Manufacturing (DfM) are the industrialization steps implemented in the part or system design and assembly/manufacturing process.

Design for Assembly: DfA is the design methodology of the part or system for the ease of assembly.

Design for Manufacturability: DfM is the design methodology for the ease of manufacturing of the parts collection that will form after assembly the part or system.

DfA and DfM both strive an optimum in their respective assembly and manufacturing design. This can lead to a conflict between ease of Assembly versus ease of manufacturing. Examples are for DFA have only one part which could mean a very difficult to manufacturere part. DfA and DfM can't be seen seperate so a new defenition is on Assembly and Manufacturing.

Design for manufacturing and Assembly: DfMA 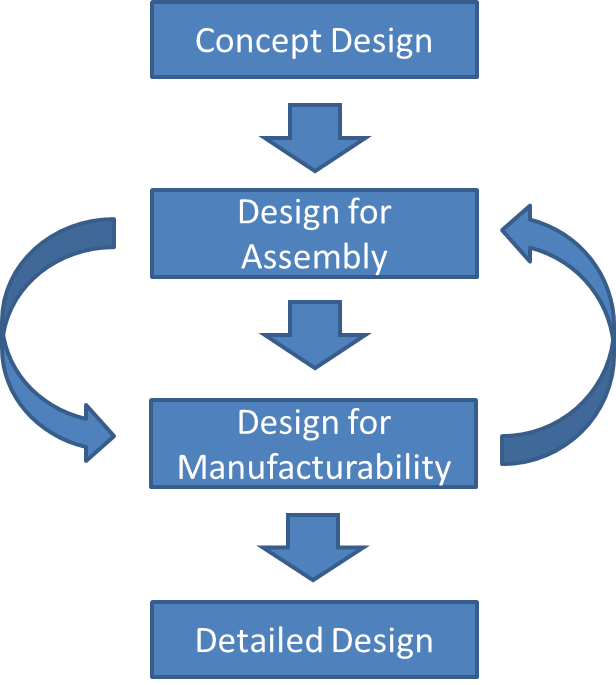 The heart of any design for assembly and manufacturing system is a group of design principles or guidelines that are structured to help the designer reduce the mounting, connection and processing risks.  The following is a listing of the DfA and the DfM rules.

Design for Assembly (DfA) is the design methodology for the ease of assembly of the part or system. DfA focusses only on the assembly aspects and must lead to an optimum solution with feedback from the Design for Manufacturing (DfM).

The use of modules in part or system design simplifies manufacturing activities such as inspection, testing, assembly, purchasing, redesign, maintenance, service, and so on. One reason is that modules add versatility to product update in the redesign process, help run tests on the sub module before the final module is put together, and allow the use of standard components to minimize product variations.

Each part will contribute  with the part risks, mounting risks and connection risks to the assembly Zero Hour Defect Rate (ZHDR). With less defect opportunities, with equal risks DPMO's, the  Zero Hour Defect Rate (ZHDR) will be lower. This must be discussed during the design phase to ensure minimum part count. Minimizing the number of parts minimize also the development, purchasing, inventory, handling, mounting, processing,  equipment engineering, inspection, testing etc. time. In general, it reduces the level of intensity of all activities related to the part during its
entire life. A part that does not need to have relative motion with respect to other parts, does not have to
be made of a different material, or that would make the assembly or service of other parts extremely
difficult or impossible, is an excellent target for elimination. Some approaches to part-count reduction
are based on the use of one-piece structures and selection of manufacturing processes such as injection
molding, extrusion, precision castings, and powder metallurgy, among others.

By minimizing the number of different parts the chance on mounting risks will become lower. This is special true for fasteners in the mechanical assembly or electronic parts as resistors, capacitors, ... in the electronic assembly. Mounting the wrong part risk will be lower. Examples are fastener with wrong  length or material.

Multi-functional parts reduce the total number of parts in a design, thus, obtaining the benefits when minimizing the number of parts. Some examples are a part to act as both an electric conductor and as a structural member, or as a heat dissipating element and as a structural member. Also, there can be elements that besides their principal function have guiding, aligning, or self-fixturing features to facilitate assembly, and/or reflective surfaces to facilitate inspection, etc.

An other approach is to reuse parts as much as possible. Different parts or systems can share parts that have been designed for multi-use. These parts can have the same or different functions when used in different systems. In order to do this, it is necessary to identify the parts that are suitable for multi-use. For example, all the parts (purchased or made) can be sorted into two groups: the first containing all the parts that are used commonly in all products. Then, part families are created by defining categories of similar parts in each group. The goal is to minimize the number of categories, the variations within the categories, and the number of design features within each variation. The result is a set of standard part families from which multi-use parts are created. After organizing all the parts into part families, the manufacturing processes are standardized for each part family. The production of a specific part belonging to a given part family would follow the manufacturing routing that has been setup for its family, skipping the operations that are not required for it. Furthermore, in design changes to existing products and especially in new product designs, the standard multi-use components should be used.

Avoiding adjustments is still the best way to design a part or system. When adjustments are required minimize the risks by making the  adjustment results unambiguous.

When orientation is important use non Symmetrical parts with an odd number of connection points or make use of part locators which ensures the correct rotation. When parts are non critical on rotation design for symmetry.

Minimize assembly directions. All parts should be assembled from one direction. If possible, the best way to add parts is from above, in a vertical direction, parallel to the gravitational direction (downward). In this way, the effects of gravity help the assembly process, contrary to having to compensate for its effect when other directions are chosen.

Use Gravity when Mounting Parts

When mounting parts into an assembly use gravity by the connections (glue, screw,..)

Use no Hand tools

Handling consists of positioning, orienting, and fixing a part. To facilitate orientation, symmetrical parts should be used when ever possible. If it is not possible, then the asymmetry must be exaggerated to avoid failures. Use external guiding features to help the orientation of a part. The subsequent operations should be designed so that the orientation of the part is maintained. Also, magazines, tube feeders, part strips, and so on, should be used to keep this orientation between operations. Avoid using flexible parts - use slave circuit boards instead. If cables have to be used, then include a dummy connector to plug the cable (robotic assembly) so that it can be located easily. When designing the product, try to minimize the flow of material waste, parts, and so on, in the manufacturing operation; also, take packaging into account, select appropriate and safe packaging for the product.

Minimize the number of manufacturing or processing steps during part manufacturing. This is in conflict with the Design for Assembly (DfA) requirement which wants to minimize the number of parts. This optimazation is part of the feedback loop between the DfA versus the DfM reviews. This must be weighted between the Functionality, Zero Hour Defect Rate, Total Cost, Cycle Time and reliability.

Design for Ease of Manufacturing

Design for ease of manufacturing. Select the optimum combination between the material and assembly process to minimize the overall manufacturing cost. In general, final operations such as painting, polishing, finish machining, etc. should be avoided. Excessive tolerance, surface-finish requirement, and so on are commonly found problems that result in higher than necessary production cost.